In case you’re just joining this blog, I want to be clear about something. I like comics. I wrote a whole blog about how I’m getting really into comics and graphic novels here.

But I’ve started noticing a trend in popular culture where people embrace their so-called nerdiness and brag about how much they know about comics and comic worlds. And it seems like the more you know about them, the more “nerdy” you are therefore, in some strange, sick logic, the “cooler” you become.

Sure. People who are really into comics could be considered nerdy. Great. Yeah. I buy it.

But I want to make something very, very clear. They are not the only nerdy people in this world.

As I’ve grown up, I’ve also embraced my nerdiness. But it seems like I’m somehow a lesser sub-species of nerd because I wasn’t into comic books when I was growing up.

So let’s clear up one thing… Comic book nerds are not the only kind of nerds in the kingdom. 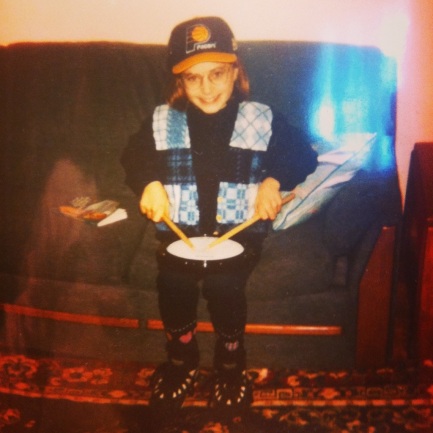 Now let me tell you a little about this girl.

Also in this picture, you’ll see some sweet glasses. They are not fashionable. they broke midway through 4th grade. She didn’t want to get new ones, so she taped them. She taped her glasses. And thought nothing of it. Moving on…

Check out the shoes. They are a size 9. She has not yet had her (albeit minimal) growth spurt. She is shaped like an L. Rather than minimize the large feet, she is wearing comfortable tennis shoes with a zebra pattern. These are her favorite shoes. They make her feet look twice and big. She doesn’t care.

She wears those shoes with mis-matched socks which she has done since she was 5. She continues to deliberately wear mis-matched socks until high school. She doesn’t care what you think of it. She does it because she figures in case you lose a sock and it’s your favorite, you can still wear at least one of them for a while. That is her thought process.

She has a blue knitted vest on. She loves that vest. She wears it all the freaking time.

She has an over-sized Pacers hat on. She doesn’t really care for the Pacers, but felt a hat really finished off the outfit.

Next to her is a book. Could be any book because she likes to read for fun. It’s likely a music book, though because she wants to practice so that she can show her teacher how much she has improved because she wants her teacher to like her best because she is an over-achiever and a suck up. She is first chair saxophone (meaning she’s deemed ‘the best’ at the instrument) and wants to be first chair of all the instruments she plays (even though this is physically impossible) She is this way in all her classes- not just music. She doesn’t care what you think of it.

She sits in the front of her classes because she wants the best view of the chalkboard. She can’t fathom not actually completing the homework assignment. She doesn’t understand why her classmates don’t also raise their hands immediately when the teacher asks for a volunteer for anything.

Her best friend is as smart and capable as her. The two of them have physical and mental competitions constantly. In sports, they’re always the two best players on the team. In academics, her best friend is better at some stuff, she’s better at other things. They like to challenge each other and both like having another over-achiever around. For them it’s normal achieving. Nothing out of the ordinary.

This girl has two favorite computer games. One is Mario Teaches Typing, where you play typing games to improve your typing skills. And the other is a Mozart game where you learn about music. The hardest level in the Mozart game is when you have to put one of Mozart’s great symphony’s back into order from small pieces. She’s pretty freaking good at both of these games.

This girl was me. And I’m damn proud of it.

There is plenty more where this came from, too.

No, I didn’t read comic books. But I hope we can all agree at this point that comic book nerds aren’t the only type of nerds in the kingdom.