I’m in a fantasy football league this year with my boyfriend and his family. 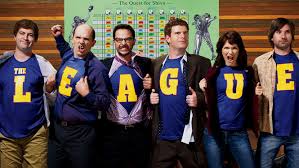 My brother has been doing fantasy football for years. I like watching football and understand how the sport is played. I know some of the best players names and enjoy following the sport.

At least a little.

This whole fantasy stuff has taken it all to the next level.

The draft itself was terrifying because I didn’t even understand how to draft people. I was picked last which means I always picked two in a row. Which means I got extra amounts of time in which I was unable to breathe because I was too busy screaming out of stress and crying that I didn’t understand what was happening or what to do and yelling at my boyfriend to come help me then accusing him of somehow cheating me out of a good team even though I have no way of showing he was doing anything other than helping me.

In case you couldn’t tell by that run-on sentence during which I never took a breath while typing, you can imagine what the draft experience was like.

Then, I found out, that I actually have to keep up with this stuff. I have to play certain players and there are trades and stuff. And I can do research on who’s playing who and what it all might mean and strategize how best to do the best and oh god I’m having another mild panic attack I’M DONE WITH THIS BLOG NOW I CAN’T THINK ABOUT IT ANYMORE. I’M GOING TO GO DO THE ONE THING I TRULY ENJOY ABOUT FOOTBALL SEASON… DRINK BEER.