Whatever you get the point.

Long before I was an aspiring young hip hop artist and freestyle rapper, I was but a mere high school student in speech class attending a private Jesuit school in Indianapolis. I used to do speeches I thought were hilarious. I showed how to properly paint nails by asking the notoriously mean assistant dean to let me paint his nails pink. I wrote silly skits with friends and pretended my mic was going in and out of speeches during really important parts. I did shit I thought was hilarious. 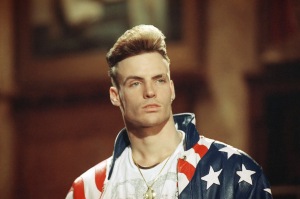 One of the attempts I made at hilarity was when I tried to have all of the lyrics of “Ice Ice Baby” memorized to deliver as an extemporaneous dramatic monologue reading to the class. This is before my years of improv and my years onstage. I was nervous. I wanted to be funny. I was 16 and really invested in this being hilarious. I listened to the song on repeat for hours. I looked up the lyrics and went out of my way to memorize it. I remember putting specific verses on repeat while driving on spring break in order to get it down.

And the day of my speech, I brought up a cheat sheet in case I forgot.

I memorized parts of the song, sure, but I was so nervous I didn’t trust myself and looked down so much I screwed up a lot and lost my place. It was uncomfortable and far from funny for everybody. I remember looking at a note a person who shall remain unnamed wrote to someone else. It said simply “What do Briana and unfunny have in common? Everything.”

To be fair, that was the meanest things got in my school. And I bet if I had confronted him about it, he would have apologized. I went to a really nice school and had, for the most part, really nice classmates. Yeah we were all teenage assholes, but we weren’t terrifying bullies.

But still, because I was so invested in making that performance where I failed and I was so convinced deep down in me that me rapping that was hilarious, I didn’t give up. Shortly after the speech I put my memorization in to hyperdrive and had that song down within the week. I didn’t get the chance to redo my speech, but I began making it my go-to karaoke song. And I began to let my inner entertainer loose and go crazy with the performance because I knew it so well. My senior year, I showed off my skills in the Black Student Union talent show, enlisted a friend to do the background vocals and performed the hell out of the song in front of a huge audience wearing a colorful dress with shoulder pads that I found at a local thrift store. I got a screaming standing ovation.

By the time I got to college, I would bring tiny podunk karaoke bars in Cincinnati  to a halt after performing the song. I go nuts whenever it’s played. I did it once at a beer festival in St. Louis and was immediately bought three drinks. I did it in a bar in Toronto and was given a shot and hugs by a gaggle of strangers. I did it a couple months ago in Santa Monica at a wine bar and had a man beg me to leave my boyfriend to be with him afterwards. (Spoiler alert: Didn’t work.)

What I’m saying is… I annihilate this song now.

And I’ll be honest, every time I do it, I still think of that epic fail in speech class when I was 16 years old and that passive aggressive note I saw on that guy’s desk afterwards. And every time, there is an angsty teenager inside me going “Take that, [insert guy’s name here]. Ya dick.”

And once you stop giving so much of a shit, you too can become a local karaoke comedy rock star.

Yo man let’s get outta here. Word to your mother.