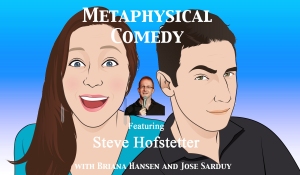 I was lucky enough to interview Steve Hofstetter for my podcast Metaphysical Comedy which I co-host and co-produce with Jose Sarduy.

Steve has a new comedy show on Fox called Laughs.

And he has an interesting perspective on what lies beyond. Check it out in his podcast and show notes.

If you get a chance, be sure to listen and subscribe to the podcast.

In an effort to continue to keep a strong distinction between church and state, many government officials are vying to take all religious symbols off churches, synagogues, temples, and other religious meeting grounds.

In this hyper-sensitive age, government officials would rather avoid a confrontation with people who have spent their lives avoiding diversity and confrontation and are therefore easily offended.

Rather than have an open, honest discussion about what it means to be securely and comfortably rooted in one’s belief system without feeling threatened by others who are different than you, the government wants to simply take off the symbols so maybe people will stop being offended altogether.

Many people are already offended.

“As long as I shook my fist, I felt the earth below shaking right back,” Young explained. “I even stopped a couple times, and the second I raised my fist and made a sound, there was a slight quake. Like God was saying ‘nip it in the bud’ or something,” he added.

Rodney Wong, a passerby, saw the entire incident. “It was just the earth beneath the guy who was cursing the heavens. And the moment he stopped, the mini-quake stopped, too.”

God’s press secretary, who said God had to decline an interview because of his busy schedule, simply stated, “Let’s just say, the big guy’s getting somewhat crotchety in his old age. People have no patience for him anymore, so he’s been playing more practical jokes than he has in a couple thousand years. If it’s raining, it’s probably not because he wants you to have a bad day, but more likely because somebody somewhere needs some rain. He’s done worse in the past, let’s be honest. At least this is milder than a huge flood or fire or bees all over the place or something! I mean, let’s put this all in perspective, ok?”

With that simple angry, impatient gesture, Jeremy Young became a believer. And a more patient person. And, just a little, God-fearing.

The sun was pouring down on a hot July day, but Rhianna Banson wasn’t worried. The fair-skinned 23-year-old had just experienced a miracle. Just yesterday, she had ventured out into the sun accidentally without sunscreen, walked for ten minutes to her target location, and made it there without being burned.

Banson claims to “respect the sun” and has not left the house without sunscreen on in 10 years. But this particularly sunny July day, she claims she just ‘forgot’ to apply it. She was shocked to have made it to her destination unharmed.

“I started crying and thanking God for His mercy. The people at the coffee shop were pretty confused. I wanted to walk to the church down the road and pray, but that would have meant another ten minute walk, so I figured I wouldn’t push my luck,” Banson recounts.

When asked if Banson would begin to venture outside again without sunscreen, she laughed and simply stated, “I’m not sure you caught this the first time…I’ve been burnt on the inside of my belly button.”