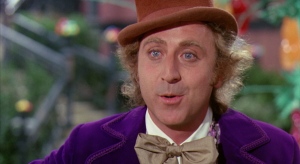 Last weekend I went to the San Diego Comic Convention. It’s the largest comic convention in the world. It’s overwhelming and ridiculously crowded and so much fun.
I had a delightful time. Not only because it was delightful to see so many of my imaginary friends from comics and books and TV and movies come to life in front of me, but mostly because it was one huge celebration of human imagination.

And I’m an big fan of the imagination.

I have a highly active imagination. I love to play make believe and dress up and create bizarro characters who exist in their own worlds (which I also create). I’m obsessed with the imagination. I became obsessed with improv during and after college because I couldn’t believe people would come watch you play in a world you’re creating on the spot where anything is possible. I nearly had a melt down the first time I did the Universal Studios tram tour because they take you into different worlds of movies and show you how people use their imagination to bring to life imaginary stories that then stimulate other people’s imagination. I’m creating a career based on living my life in the make-believe. I love people who play along and who embrace their imagination. And Comic Con was full of those people. And I loved them for it.

Also there was a lot of free beer. So that was pretty cool too.

Kim Kardashian revealed she has psoriasis, a skin condition which manifests itself as red patches on her legs. She and her family are proud to announce this is the first disease the reality star has contracted that is not contagious.

Google+ has surpassed 20 million users in its short existence. Now that it’s popular, many hipsters are leaving the site already, complaining that they knew about it before it even existed.

Justin Howard (aka Nordic Thunder) won the US Air Guitar National Finals in Chicago last weekend. To celebrate, he talked to a real live woman.

Jay Cutler is reportedly no longer engaged to reality TV star Kristen Cavallari. Though both are remaining quiet on the issue, rumors suggest that Cavallari may have finally watched a Bears game from last season and changed her mind about Cutler.

Hot Doug’s, the Avondale hot dog restaurant that always has a line waiting for food, was forced to close on Saturday because of the rain water from Friday night. Sources claim Doug was afraid the water would cause hot dog shrinkage and ruin the reputation of his products.

The US Postal service is considering closing fourteen Chicago-area post offices. Many post office workers and hundreds of trolls that guard the mail in the back rooms are worried about finding new jobs if that happens.

A Glendale, CA man was hospitalized after attempting to remove a protruding hernia from his own body by using a butter knife this past week. He reportedly said it looked delicious.

MGD 64 Lemonade is being discontinued after low sales across the board. Miller Beer has formally apologized to the group of men hired specifically to pee in the bottles before packaging to improve the taste, and promises to help find them work in another department.

Researchers in Tanzania have created a serum that smells like foot odor to lure in and kill mosquitos in an attempt to control malaria and other mosquito-spread diseases. Frat boys everywhere are being recruited to help with the cause.

Jesse James and Kat Von D have called off their engagement. Yeah. I don’t give a shit either.

All five actors who played the children in “Willy Wonka and the Chocolate Factory” will be reuniting for the first time in 40 years in Chicago this August. Apparently Veruca Salt insisted upon it saying, “I don’t care how, I want it now!” And after 40 years, the others finally gave in.