Back at it, friends.

Like it or not, another episode is coming at you. So I hope you like it. It’s certainly not my intention for you to not like it. But I promised the’d be a’comin, so here they a’are.

In this episode, I discuss getting down to the work and putting your nose down to the grind.

I mention Do the Work by Steven Pressfield.

I also discuss how I’ve been traveling a lot lately.

I, of course, talk about yoga. (And the magic 108 number yogis love along with sun salutations).

I get a little David Goggins-y for a minute.

I also talk about running (and of course mention my pups).

And I discuss the benefit of having ongoing conversations with yourself.

Check it out on iTunes. Subscribing and rating helps out, but you do you baby boo. 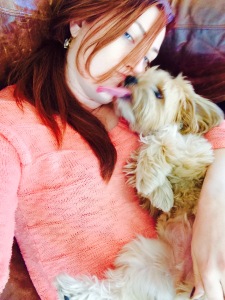 Over Thanksgiving, I had a serious boyfriend. He is the most handsome creature I’ve ever laid eyes on. His name is Romeo. Which is perfect for him because he is a love bug.

My original goals over Thanksgiving last week were to be really productive and to finish up a bunch of projects I was working on. But then I got to hang with my boyfriend Romeo.

And here’s the thing- I actually relaxed. Over a holiday. Can you imagine?

If you know anything about me, you know I LOVE work and be productive. But I also LOVE dogs. And since I have a crazy schedule at the moment, I don’t really have time for a dog. So I live vicariously through other people’s dogs. Like the perfect and sweet Romeo.

And it was actually really wonderful. We went on several walks every day. Sometimes he would come over and look at me and I would know it’s time to stop working and give him attention. And we would snuggle for long periods of time.

And I would actually relax. Like deepbreathsmilingandgigglingathiscuteness-style relax. And it was wonderful. And a real vacation. And dang… I needed it.

And yeah we took a lot of selfies. Look at him. You’d do the same and you know it.

Thank you, sweet Romeo for getting me to stop, drop, and roll around with your cuddly-cute-self. You’re my most successful romantic relationship to date.

As I’ve mentioned once or twice (and will continue to mention throughout the month- my apologies), I’m working on quite a few projects right now. I love doing it, but I do run into issues.

Mostly within my own head.

I’m glad I just read Steven Pressfield’s book “Do the Work.” I’m very glad I did this. I think that’s the fuel upon which I can continue to push myself and create. In huge part because it gives a play by play of what can happen during the creative process. And because it gives that play by play, you can be ready for the shit as it slowly hits the fan.

The biggest focus of his book is the idea of the “resistance,” which comes as a natural reaction to “creation.” I love the whole concept. It’s simple really- with every action there’s an equal and opposite reaction. And even though creation is this often physically intangible “action,” it naturally will cause a reaction. And that reaction is this idea of resistance.

Resistance is that little voice inside your head that tells you this idea is terrible. It’s that nagging voice that keeps you distracted during the one hour per day you’ve set aside to write. It’s that voice that convinces you to do the dishes instead of working on the project you have at hand.

I hate that little voice. I don’t like anything about it. And the problem is, I’ve spent years either listening to it or heeding its advice without ever realizing what I was doing.

But after reading “Do the Work,” now I expect it. I know it’s coming. I know it’s a natural part of the process. And I use it as a guide. When I feel strong resistance to some project, I know I’m onto something good.

I’m writing for National Novel Writing Month. Before I even wrote a word of the novel, I started questioning it. I was outlining the last of the characters I want to write about and I started hearing this voice say “This is stupid. This sucks. You’ll never actually get this written. Even if you do, there’s no way you’ll ever get it published. Even if you self-publish, nobody will like it. Why are you doing this? This is a waste of time. Just stop…” You get the idea.

Normally, this would cause more problem in my own mind. Normally, I would listen to this voice. I’d start to work on another project (because I always have a ton of ideas) and I’d never get anything done.

Instead, I was armed with two very important pieces of information.

1. This voice is the resistance. So I’m doing something right because it feels the need to rear its ugly head.

2. I’m doing this for me. I’m partially writing this book with the idea that I could someday publish it. But more importantly, I’m writing this book because I want to prove to myself that I can. I want to get these words and these stories on paper. I want to be a person who follows through on a major projects. In writing this, I’ll be a better person because I’ll become more creative and more empowered.

So, while I still hear that little voice inside my head nagging at me and I listen to it (because pretending it isn’t there gives it more power than it should), now I let it go on and on like Kanye at the Grammys. Then when it’s done and it’s little vocal chords are strained and tired, I smile and thank it for reminding me I’m doing exactly what I should be doing. Then I get right back to doing the work.